also known as permitless carry, will make it so that anyone who legally meets the requirements can lawfully carry a concealed gun without a permit. The criteria to meet are that the person is over 21 years of age and can legally have a firearm in his or her possession.

This new law will apply both to residents and non-residents of Utah who meet those requirements. Also, to clarify, this law allows one to carry concealed LOADED without a permit.

The idea behind Constitutional Carry is simple to understand. The thought is that the Second Amendment protects American citizens and their right to KEEP and BEAR arms. What do those two 4-letter words, keep and bear, actually mean?

To keep and bear means to own and carry.

Because that right also says that keeping and bearing arms shall not be infringed, more and more states are entering the permitless carry fray.

As the new law goes into effect on May 5, 2021, Utah will be recognized as the 17th state to enact this type of law. Below is a map of the others: 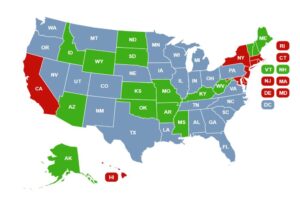 Of course, this legislation has gotten some criticism from the anti-gun groups like the Utah Gun Violence Prevention Center, who had this to say in a Tweet:

And of course, we’d like to point out that the above statistic doesn’t mean much when you consider three of the safest states in the union–Vermont, New Hampshire, and Maine–also have Constitutional Carry and seem to be doing fine.

Another notable piece of information in the bill is that a portion of the unused funds from the Concealed Weapons Account will be transferred to a different fund. The money will be used to help fight suicide at the end of the fiscal year.

Utah’s Constitutional Carry law won’t go into effect until May 5, 2021, but it is coming! As of right now, you CANNOT carry a concealed gun in Utah without a permit.

If you want to know which states will accept your concealed carry license, consider our Legal Boundaries by State Book. Not only does it show reciprocity agreements, but all the pertinent gun laws of the states you travel to. It is available in digital or physical copy. The digital copy is updated continually, so you will always have the most up-to-date information to go on.